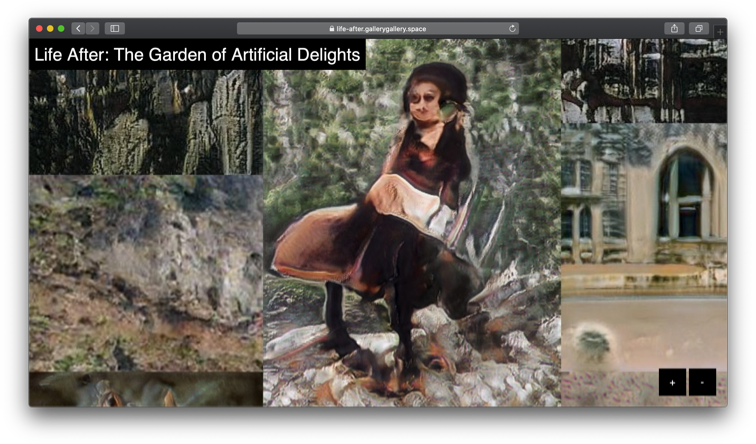 Life After: The Garden of Artificial Delights

Life after: The Garden of Artificial Delights can be seen at:
https://life-after.gallerygallery.space

Albena Baeva spent the last year training GAN and StyleGan AIs to generate images of outrageous bodies. Part-human, part-animal, these creatures appear to come from delirious fantasies of both heaven and hell, from mythological pasts and sci-fi futures simultaneously.

Her latest work, Life After: The Garden of Artificial Delights is a browser-based triptych that resembles a tapestry of such a fantasy world consisting of 73 AI-generated elements, populated by 32 trans-species creatures. The work reminds us of Hieronymus Bosch’s apocalyptic The Garden of Earthly Delights, to which the title refers.

Baeva’s work with AIs over the last year led to a series of works, including Dangerous Creatures Living in the Deep (shown at gallery Gallery in November 2019), a stained-glass oculus Autoportrait (shown at gallery +359 in 2019), a series of oil paintings entitled Dangerous Female Creatures Living in the Deep (shown in early 2020 at gallery Doza), and In-contact, a dance performance that will premiere in July in Lithuania.

When you first open Life After: The Garden of Artificial Delights, a small fragment of the work fills the screen. Reloading the work reveals a different fragment each time. It is up to the visitor to explore this garden by clicking, dragging and zooming in and out. Exploring the work from the inside out, from detail to a wide shot, becomes a journey into a fictional world on the edge between digital mythology and autonomous artificial intelligence.

Albena Baeva creates interactive installations for urban spaces and galleries for which she uses new technologies, creative programming and DIY practices. She has two MAs; in Restoration (2008) and in Digital Art (2010) from the National Academy of Art in Sofia where she specialized in technologies of art practices from the 12th to the 21st century. In 2011 she was awarded the international Essl Art Award for contemporary art and Vienna Insurance Group Special Invitation.

Life After: The Garden of Artificial Delights has been realised with support from the Solidarity in Culture programme, Sofia Municipality and the kind support of Telilab at Technical University of Sofia.