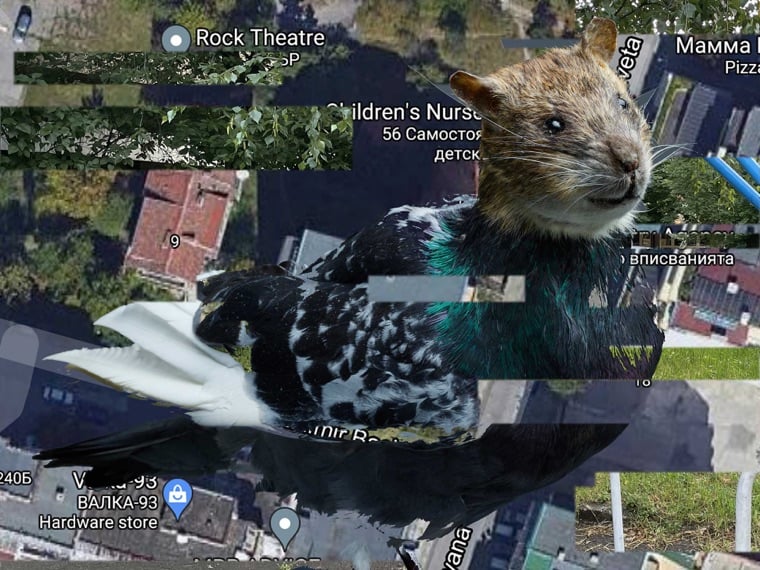 Daniel Szalai’s Flying Rat is the first in a series of augmented reality exhibitions to be shown in gallery Gallery’s new sculpture park Ploshtadka.

For the next few months, a virtual sculpture of a pigeon with the head of a rat will be part of a children’s playground between housing blocks in Sofia’s Geo Milev neighbourhood. The work is part of a research project on the impact of urbanization on the world around us by the Hungarian artist Daniel Szalai.

Once considered a symbol of peace and love, doves are now synonymous with dangerous pests that spread infectious diseases. This change in how we view doves has led to a change in the space we allow them in our world. Contemporary urban safety planning includes measures to restrict the movement, habitat, and reproduction of pigeons. Unlike Vienna, where Szalai began his research in 2018, Sofia has no centralized regulation of its pigeon population.

Szalai’s sculpture is reminiscent of dinosaur- and dragon-themed children’s attractions we see in parks and parking lots. In these attractions, visitors are placed in a situation where the boundaries between the fantastic and the realistic are blurred against a backdrop of housing blocks, highways, and malls. It was this breakdown of reality that Szalai used to develop his thesis.

The imaginary urban enemy of the flying rat is the subject of Szalai’s sculpture, a metaphor that determines our social norms and the way we construct our world. Flying Rat is the continuation of project Stadtluft which examines pigeon-bureaucracy in Vienna. The project focuses on the political, scientific, and technical apparatus that treats birds according to the logic of urban planning. The project also comments on issues of oppression and control in a broader political perspective, including with regard to certain groups of people and minorities.

Are Eastern European pigeons happier than their persecuted relatives in Vienna? Daniel Szalai takes the rat with wings - as some refer to pigeons today - and turns it into the poetic work Flying Rat, a hybrid creature that has the power to rise above the oppression and control of modern man.

Daniel Szalai is a Hungarian artist, whose projects investigate peculiar manifestations of human-animal relationships and reflect on societal, political, and economic anomalies. He mixes different media in his artistic practice and also works with spatial installations. Szalai studied photography at the Moholy-Nagy University of Art and Design in Budapest and the University of Applied Arts in Vienna, and he also holds a Bachelor’s degree in Art and Design Theory. Szalai is a member of the Carte Blanche Collective, the Studio of Young Artists’ Association, and the Studio of Young Photographers, Hungary. He lives and works in Budapest.

Ploshtadka (Bulgarian for playground, a landing site, or a construction site) is the new virtual sculpture park of gallery Gallery. It is located along Elisaveta Bagryana Street, directly across from the Registry Agency. Ploshtadka shows digital sculptures visible only to visitors’ mobile devices through augmented reality. It is a natural continuation of our digital exhibition space and the permanent collection of gallery Gallery.