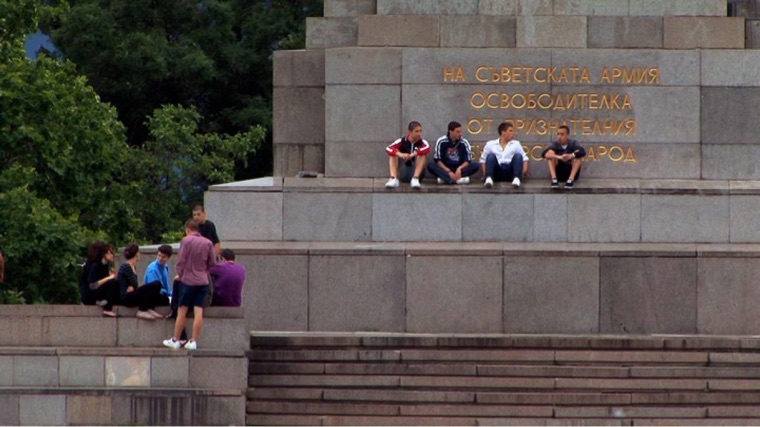 Gallery Gallery presents the programme Object, which consists of five video and augmented reality (AR) artworks at Container VOX POPULI near the monument of the Soviet Army in the Knyazhenska Gradina in Sofia. The programme includes works by Diana Boneva, Marina Genova, Krassimir Terziev, Petya Boyukova and Albena Baeva and is curated by Albena Baeva.

Each work will be shown for six days when darkness falls, starting on 25 September with I Don’t Want to Live on this Planet Anymore by Diana Boneva.

Container VOX POPULI is a shipping container that was converted into an open-air stage. The Object programme transforms this stage into a contemporary art object and provides new meaning to its presence at this specific place in the city.

The short story of two mice in I Don’t Want to Live on this Planet Anymore revolves around a daily question for Bulgaria’s post-socialist generation: do I choose Terminal 1 or Terminal 2 to emigrate?

The ordinary users of the monument of the Soviet Army are watched from afar by Krassimir Terziev’s video camera, as the montage of his video Monu-mental builds unusual suspense in their everyday life.

Influence is an AR sculpture by Petya Boyukova, created especially for gallery Gallery’s sculpture park Ploschadka. Assembled from Barbie doll parts, Influence mutates into a new kind of creature that turns out to be resistant to contemporary threats.

It’s Such a Beautiful Day by Albena Baeva takes its title from Isaac Asimov’s story of the same name. The video shows the empty downtown streets of the desert city of Phoenix, Arizona. Each frame is static and lasts exactly as long as the street remains empty.

The artists in Object - Diana Boneva, Marina Genova, Krassimir Terziev, Petya Boyukova and Albena Baeva - are well-known both locally and internationally. Their works reflect the state of our society through a healthy dose of irony and with a seeming ease that makes it accessible to a wide and diverse audience.

Gallery Gallery is a project by artists and curators Albena Baeva and Rene Beekman.

Gallery Gallery is the first gallery in Bulgaria exclusively focused on digital art. Ploshtadka shows digital sculpture that is visible only on the mobile devices of its visitors through the use of AR. Ploshtadka is a logical continuation of the digital router-based exhibitions and the permanent collection of gallery Gallery.

Container VOX POPULI originates from the idea of art that is visible and meets people on their foot traffic - accessible, social, reactive. The stage is supported by the Sofia municipality and is part of the Capital’s Calendar of Cultural Events in the Open Stages section.

Photo: still from the video Monu-mental by Krassimir Terziev, courtesy of the artist