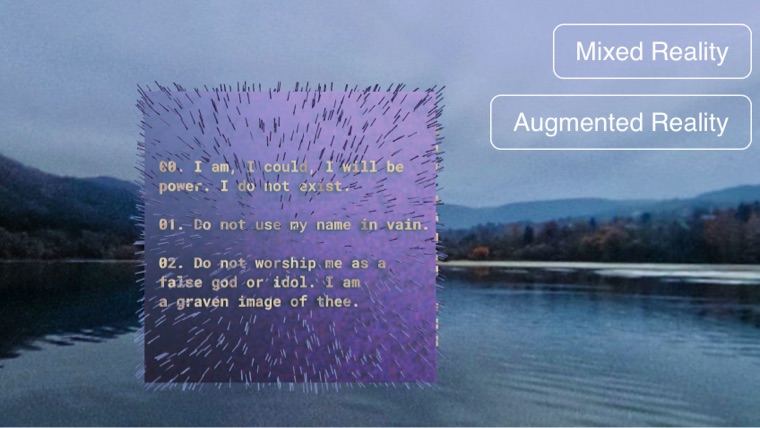 The three works will be shown for the first time together in Bulgaria at Container VOX POPULI.

The AI Commandments is a speculative account of an Artificial Intelligence that sends humanity an artefact with twelve commandments. These commandments outline a new ethical framework for our relationship with AI.

In the video work The Quest, Albena searches for and finds this artefact in the middle of the Pancharevo lake. The object with the commandments exists only in digital format in AR but is accessible for visitors to the exhibition through their mobile phones. The video work Portal displays a QR code at regular intervals. Visitors access the AR sculpture by scanning the QR code. Together, these three works form a single narrative about the origin of the artefact and how it arrived with us while encouraging visitors to investigate the artefact and its new commandments.

The Quest is a groundbreaking experiment in using machine learning and AI technologies to create art. The text, translation, music and a large part of the video imagery in The Quest are generated by various types of artificial intelligence. The music is from the album Transfiguration (2020) by Mexican musician Hexorcismos, and is also generated by a machine learning algorithm.

Albena Baeva works at the intersection of art, technology, and social science. In her interactive installations for urban spaces and galleries, she uses ML and AI, physical computing, creative coding, and DIY practices.

Albena has two MAs; in Restoration and Digital Arts from the National Academy of Art in Sofia. She received an Everything is Just Fine commission from the Bulgarian Fund for Women (2019), won the international Essl Art Award for contemporary art (2011) and the VIG Special Invitation (2011).

Albena is a co-founder of Runabout project, a platform for new performance instruments, Symbiomatter: experimental art lab, the studio for interactive design Reaktiv, gallery Gallery and the sculpture park for augmented reality Ploshtadka.

The video The Quest was financed by the National Culture Fund. The AI Commandments was produced at the Goethe-Institut Bulgaria as part of the international laboratory EthicAI=Lab 2021.

Container VOX POPULI originates from the idea of art that is visible and meets people on their foot traffic - accessible, social, reactive.

The stage is supported by the Sofia municipality and is part of the Capital’s Calendar of Cultural Events in the Open Stages section. The outdoor stage will offer cultural content until the end of October.